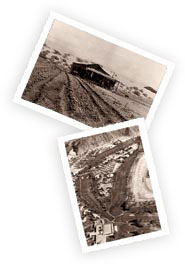 Set in the heart of Southern Californias Coachella Valley, Indian Wells is steeped in a very rich and colorful history. From early inhabitants who unearthed its namesake well - a source of life in an otherwise arid desert - to intrepid settlers who pioneered the date industry to the city's 21st century status as a world-class residential and resort community, Indian Wells enjoys a distinctive narrative that underlies an exceptional lifestyle.

A century before Zane Grey immortalized the Old West, an Indian village had formed around a hand-built well in the Southern California desert. The characters in this tale were to be the same he celebrated: Indians, explorers, pioneers, and prospectors; their actions framed against a rugged backdrop of mountains rising from a raw sand floor.

As early as 1823, the name "Indian Wells" was documented in the expedition diaries of Captain Jose Romero, who had been sent to find a route through the San Gorgonio Pass to Tucson. Though the site is no longer accessible, it was located near the north side of Highway 111 east of Miles Avenue, west of Point Happy. In 1853, W.P. Blade, a Smithsonian Institution geologist, reported the community was a thriving Indian village. But a decade later, all would change when gold was discovered on the Colorado River.

William D. Bradshaw knew a gold mine when he saw it. He built a trail from Los Angeles through the desert, used, along with his name, by the Alexander and Company Stage Line to transport prospectors to their potential fortune. Indian Wells became an important stop along the trail. In 1875, Bradshaw Stages abandoned the route because the Southern Pacific Railroad had begun extending its line through the Coachella Valley. But in 1876, Wells Fargo Company reactivated the route.

The ride to the stage station, called Old Rancheria, was often fraught with danger. Holdups and shootouts occurred. One 1906 incident, attributed to a gang led by Edington Ed (alias Endless Ed), left soldiers from Fort Yuma without their $9,000 payroll. Ed and Co. reputedly robbed the cavalry at the Indian Wells station.

To accommodate the increasing traffic through the desert, in 1870, the County of Riverside built what became known as the "County Well" some 100 feet south of the Indian site, which was abandoned. For nearly 40 years, the newer well was the valley's only established watering point.

In 1875-76, Lieutenants Eric Bergland and George Wheeler led reconnaissance parties of Army engineers to study the feasibility of irrigating the Imperial Valley by diverting water from the Colorado River. Lt. Wheeler's comments were a portend: "...at some future time," he wrote, "each cubic foot of waters of the Colorado is likely to become valuable in agriculture, mining or other pursuits..."

Despite the risks and extreme weather, a few years later, settlers arrived. Some of the earliest were the families of William Blair, Ernie Chapin Sr., Melvin Harmon and James O'Neal, who opened "Dan's Market" and established the first Indian Wells post office. The city's residential future was cast in 1913-14 when Melvin Harmon's father exercised his Civil War grant to homestead a section of what is now Indian Wells Country Club, and Will Hayhurst, a muleskinner from Twentynine Palms, began to develop Rancho Palm Springs, now Eldorado Country Club.

By 1922, the Date Palm, a local publication, noted, "No section of the Coachella Valley is now undergoing more rapid and substantial improvement than is Indian Wells." The writer had no idea what was coming next! 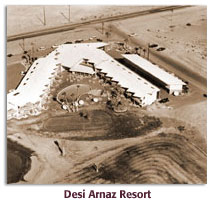 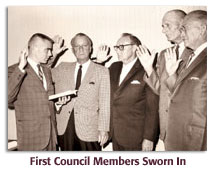 When Palm Desert attempted to incorporate in 1965, its original plan was to include Indian Wells and Rancho Mirage. But community leaders had other plans. Before the Palm Desert group could file its papers, Citizens for Incorporation for Indian Wells filed its own petition. On February 24, 1967, the petition was accepted. An election date was set for June.

Without question, Indian Wells was created to preserve its residents' independence and vision. As Bert Cavanagh recalled at the 20th anniversary celebration, "Indian Wells incorporated primarily for self protection. There were other cities eyeing the area and we wanted to take control rather than be annexed."

Voters clearly were of one mind. When the election was held on June 27, 1967, there were only 285 registered voters. Voter turnout was 85%. An incredible 93% voted in favor of incorporation. According to the League of California Cities, the incorporation passed by the highest percentage of voters in California's history! 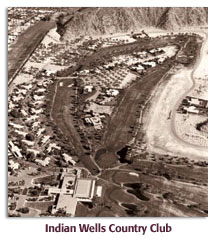 When Mayor Peterson died in office, Vice Mayor H.L. "Bert" Cavanagh completed his term. Due to other commitments, Cavanagh stated he did not wish to continue on as mayor, but returned to his active role as vice mayor when Joe Young was elected in 1972.

Though Young was the newest member of the council when he was elected, he received a unanimous vote. Accomplishments during his tenure (1972-75) included the passage of sewer bonds and completion of the initial work; planning for drainage improvement projects; moving the city council, staff and planning commission to new quarters on Club Drive; and the naming of Eisenhower Mountain. In addition, the Balboa Bay Club/Indian Wells, designed by renowned architect Edward Durell Stone, opened its doors with a split-level clubhouse and four championship tennis courts. The city began its tradition of hosting big-name tennis when Indian Wells played host to the desert's first major tournament, and 13 women held the first meeting of the Indian Wells Garden Club.

Politics and business often go hand in hand, to both good and bad effect. Such was the case during Frank Chilson's term, 1975-1984. On the positive side, Village I, the city's first shopping center was approved. On the negative, Proposition 13, which passed in 1978, restricted the city's ability to create property taxes. Based on the five-cent tax structure in existence at the time, post-Prop 13 revenues totaled a mere $40,000. And when Proposition 4 passed, requiring that funds earned from invested capital be reinvested in a community within a 10-year period, civic leaders were faced with a dismal future. They sought an alternative source of revenue. Financial consultants suggested the city seek premium destination resorts. Richard Oliphant, who was to become Indian Wells' next mayor, was assigned the task of trying to locate suitable resorts.

While Mayor Oliphant was in office, 1984-1992, Indian Wells met its goals. Two city-owned 18-hole Ted Robinson-designed golf courses were built at The Golf Resort at Indian Wells (renamed the Indian Wells Golf Resort in 2007) between the Hyatt Grand Champions and Stouffer Esmeralda Resort (now Marriott's Renaissance Esmeralda Resort and Spa). American Golf was brought in to manage the courses, which have gone on to win numerous awards. Charlie Pasarell moved his Pilot Pen tennis tournament to the Grand Champions site. Village II was built across the highway from Village I, and a General Plan was adopted. 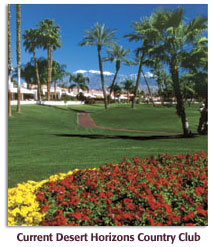 In July 1992, Indian Wells turned 25. Anniversary events ranged from a water volleyball tournament at the Hyatt Grand Champions to a Rotary Golf Tournament, Jazz Concert on the Green, student mayor and council for the day, a Village I bake-off featuring hotel chefs' 25th anniversary cakes, and a Citizens' Appreciation Day.

A good deal of energy in the early '90s went into strategizing how to deal with recession and hits from Sacramento. But all was not doom and gloom. In 1992-93, city leaders were successful in holding down the general fund portion of the budget, completing the "undergrounding" of utilities, planning and approving Indian Wells' first affordable housing community, building walk and bike paths, and completing such major projects as the over-crossing on Fred Waring Drive at the Whitewater Wash and planning the bridge that would connect Eldorado Drive to Fred Waring Drive.

At the same time, Indian Wells expanded its participation in the Cove Communities Services Commission to include the Legends Ball Fields at the Palm Desert Civic Center Park, the YMCA of the Desert, the Joslyn Cove Communities Senior Center, the Children's Discovery Museum and the Sports Complex at Cook Street; and became a forerunner in emergency preparedness. It also expanded its sponsorship of major events with the advent of the Desert Town Hall of Indian Wells Lecture Series, which has become one of the valley's most highly regarded cultural happenings.

By fiscal year 1995-96, the city had turned another financial corner. It had lived through a serious economic downturn and come out with $8 million in general fund reserves. In 1996, as it approached its 30th birthday, Palm Springs Life noted Indian Wells residents "are among the most affluent people in the nation. Abhorring glitz or flamboyance, they have created a city government in their own image-one of quiet efficiency and responsible management."

Just a few years later, Indian Wells was listed as the city with the highest national income. Coincidentally, with the completion of the Wall Street West office building, it had emerged as the valley's financial center.

In 1998, the former Erawan Garden Hotel was transformed beyond recognition into the lovely Miramonte Resort. Together with the Hyatt Grand Champions, Indian Wells Resort Hotel, and Renaissance Esmeralda, the four properties were successful in generating more than 60% of Indian Wells' operating budget.

As the 20th century drew to a close, Indian Wells annexed 387 acres of land in its sphere of influence, including the new home for the Newsweek Champions Cup and State Farm Evert Cup (now BNP Paribas Open) - the Indian Wells Tennis Garden. The city took its community grants and charitable contributions to an entirely new level by pledging $5 million to the California State University-San Bernardino desert campus, and dedicated the Eisenhower Walk of Honor, a tribute to President Eisenhower, military veterans and five Medal of Honor recipients.

Not to be outdone by its own accomplishments, Indian Wells launched into high gear in the new century. Public safety got a boost with the installation of red light cameras, the Hyatt and Renaissance Esmeralda are finalized extensive renovations, The Indian Wells Golf Resort is undergoing a significant facelift with the addition of two newly designed 18-hole championship courses and a new, 55,000 square foot clubhouse, the Indian Wells Historic Preservation Foundation was founded and received its nonprofit 501(c)(3) status, and a series of staff and City Council retreats has focused community leaders squarely on the future.

This year, as the city moves towards celebrating its 50th anniversary, its vision has been re-clarified. But it sounds remarkably like the first take. Council and staff concur, "Indian Wells is to be recognized as a city where residents live in a content, tranquil, happy environment with an exceptional quality of life, second to none, with residents who are caring and concerned with the needs of others."